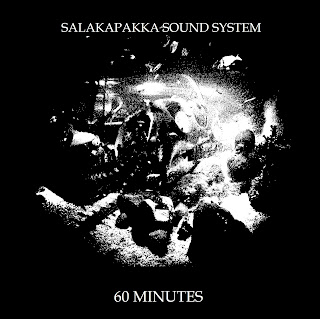 Nine years I've been collecting this and at last it is ready. 60 one-minute pieces which are more or less readymade sound experiments, mini songs or whatever I felt like doing at the time. They appear here in same order as they were made; the first one(s) made as early as 2006 and the last one made just prior to release date (by layering first 59 tracks together).
As you can imagine, there is a lot of variation throughout the release. Earliest ones being experiments of digital recording media and later ones being ad hoc bursts or skeletons of tracks later being released on some other form in other SSS releases. Maybe you can hear some evolution (or degeneration). In my ears it clearly shows my shift moving year-by-year towards noise.
Mastering such a variable tracks was a nightmare until I figured out to set the loudness levels by EBU standard automation and then boosting them up by 10dB so the listener should not turn the level knob every time the track changes. Therefore "60 Minutes" is not boosted up to -0 level overall. Quieter tracks (and some tracks with variable levels) peak up to zero but some static furious assaults do not peak anywhere near.

"Incredible. "Soundscape" is such an appropriate word for these tracks; I feel like every minute is a glance in a window in a surreal building I am compelled to run all throughout. I love it."

Download it and shuffle play it.
WAV, FLAC, MP3 at archive.org
MP3 at Free Music Archive