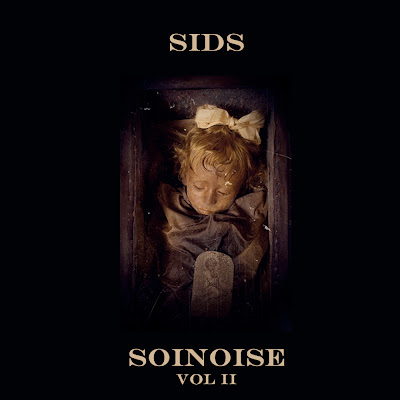 Salakapakka Sound System track untitled piece for kantele #1 is part of a new web compilation "Soinoise vol.2: SIDS". Remember the kantele which got my hands on recently? As you can guess by the title, this track is made entirely by using that particular instrument and a few effects. Here is what Pawel, the person behind soinoise, has to say:
"The second installment in the Soinoise cycle has become a fact. A fact strangely intriguing and painful, not to mention – international.
This new reality has been subordinated to the sound of musical instruments. That was the starting point – as little electronics and as much live sound as possible. With time, it has evolved a little towards a game with the audience – a game of pretenses and outright trickery. However, the plan of constructing a coherent and constructive statement on instrumental music has been fulfilled.
This compilation lets us lean over certain somewhat forgotten (sometimes literally) instruments and see (or rather hear) if they still have anything to offer. We can analyze single sounds as well as their combinations that dissolve unintelligibly into one another. This freedom, openness, lends itself to the structure of the compositions themselves. Some of them are complete and well thought-out, for some, the word improvisation becomes a none too accurate euphemism.
One should remember that, rather than mere listening, our experience of music is a form of communion."
Tracklist:
01 Untitled Piece for Kantele #1 - Salakapakka Sound System
02 Flowers of Romance (PiL cover) - Pineal Eye
03 Przepis na Naleśniki - Social Cream
04 Bux - Gamid Group
05 Laughing Pig - Sense From Nonsense
06 Krimsun und Klover (Tommy James & The Shondell cover) - Count Brent von Himmel & the Ziopin Choir
07 Perpetual Motion Holder - Pythian Whispers
08 Kshatriya - Indo
09 Divine Times - Merkabah
10 Traffic - Limited Liability Sounds
11 Le Matin des Magiciens - The Day of the Antler

There has been a number of times when someone asks about or suggests that I should find a "proper" label for releasing my stuff. Now there are two brand new releases ready to go and I am (quite inactively though) searching for labels which might find them interesting enough for a "proper" release.
First one is a full length called "Penetrating angel". It is kind of mixed noise and dark ambient stuff. Four tracks lasting nearly an hour. Second one is a 3" cd called "iDiot" and it is mostly 'rhythmic dark dance music with experimental edge'. This doesn´t mean that I quit releasing stuff for free... far from that.
All interested parties just take contact. Otherwise I end up selling only physical copies of them at my site. Until then you have to deal only with cover pictures. Believe me, they are probably the best stuff I´ve done so far. 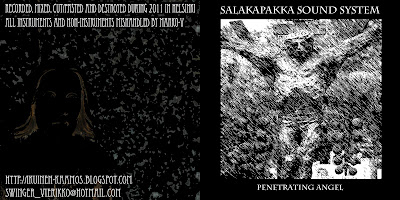 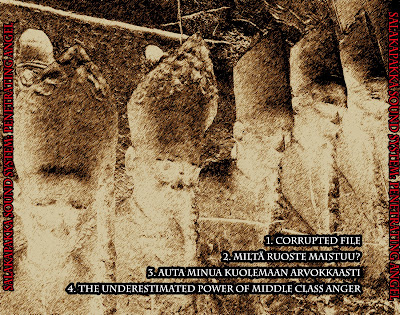 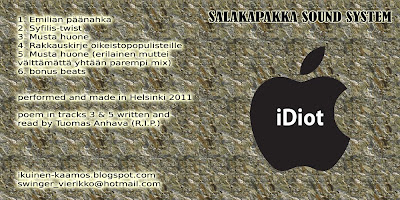 Good news for all you lovers of physical cd-copies. All Salakapakka Sound System releases are available as physical cd-r´s with pro-printed or hand-made covers. E-mail for prices and remember that I am more than willing to trade them for your releases.
Lähettänyt Marko-V klo 10.21 2 kommenttia:
Uudemmat tekstit Vanhemmat tekstit Etusivu
Tilaa: Blogitekstit (Atom)