Just noticed that there exists also this FM3 Buddha Machine related album called In An Expression Of Form by Masuran (which used to call themselves Royal Trans). It´s free download so give it a try.
Lähettänyt Marko-V klo 1.12 Ei kommentteja:
Tunnisteet: buddha machine, FM3

Just recently noticed that there is also death/black/progressive metal band in Finland called Ikuinen Kaamos. This blog does not have any connections with that band but anyway go check them out here or there.
Lähettänyt Marko-V klo 0.12 Ei kommentteja:

Having fun with toy synth

I am a proud father of little girl who was born in february 2008. I just found her a kids toy synthesizer at a local flea market for 5 euros. Now it seems that I am the one who enjoys playing it more. It has these ridiculous cheap unrealistic sounds like piano, guitar, banjo (my favorite), flute etc. There´s also buttons for funny little sounds like frog, dog, bird... But hey, that´s not all. There is also a set of pre-programmed rhythms like rock, slow rock, waltz, tango etc. which you can slow down or speed up. The best of these pre-set rhythms is called 16 bit which is a killer low fidelity-trash-dirrrttty electro beat! (loop sample here) Drive it through distortion effect at 110% volume and you got a nice punky disco beat.
I´ll probably use this marvellous little toy somehow in my future projects, unless it breaks down before that. My daughter´s playing style is more punk than mine, meaning she likes to beat it real hard. 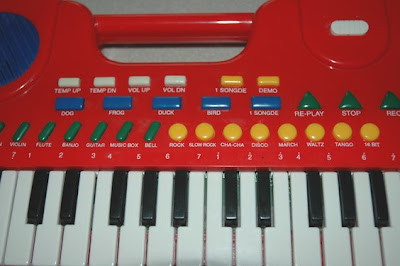 I was supposed to post more stuff but late happenings took all of my time and energy so more stuff coming soon.

Tuesday was a sad day for Finland. Another random school shooting incident in a year. Previous shooter was a big fan of KMFDM (one of their songs could be heard on his YouTube posts), now this time this idiot called himself Wumbscut86 on YouTube. Not necessarily a good publicity for those bands. Fans can choose the artists they like but unfortunately artists cannot choose their fans.
Stupid fucker couldn´t even shoot himself properly (died only after few hours of shooting himself). Where do these morons come from? Incidents like these piss me off.
Lähettänyt Marko-V klo 13.45 Ei kommentteja: 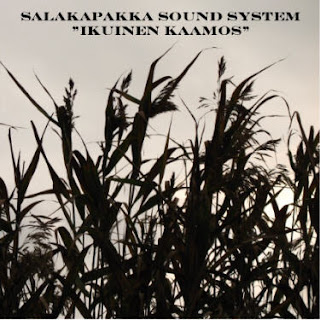 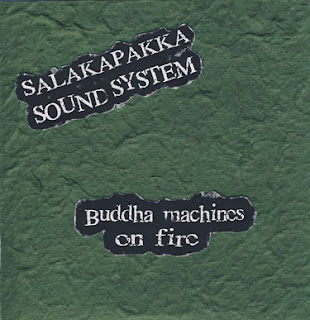 First post is a work I made in 2006-2007 while studying sound engineering and sound design. It is a musique concrete album composed of field recordings I made in Japan and Finland. No “real instruments” or ready made sound effects used. Some of the sounds have been heavily processed and some are unaffected.

"Kahden kulttuurin ääniä” (sounds of two cultures) CD was originally made in 5.0 DTS surround sound and stereo mix was just an extra version that was not supposed to materialize in a first place. Because I haven´t got the chance to listen to DTS sound at home I decided to make a stereo version which I could play at home. Unfortunately mixing down to stereo had to be done quick (and I was then tired of the whole project), therefore I´m not completely satisfied with it. But after all it is not commercial release so why bother whining about it.

This blog has been created mainly for distributing the music/sound art I make. Occasionally I will comment a thing or two regarding my interests.
I will post on irregular basis most of the hits and misses I´ve made. Love it or leave it...
My primary influences and interests are musique concrete, experimental electronics, drone, ambient, noise, Aube, NoN, Troum, Fennesz, Pan Sonic, Sunn O))), Eraserhead soundtrack etc.
Stay tuned, download the stuff and drop a comment if you feel like.
Lähettänyt Marko-V klo 23.07 Ei kommentteja:
Uudemmat tekstit Etusivu
Tilaa: Blogitekstit (Atom)